An SMS campaign to promote awareness of fall armyworm (Spodoptera frugiperda) and mitigation measures, which was carried out in four Zambian provinces, has resulted in the enhancement of farmers’ knowledge and boosted their capacity to effectively manage the pest. The campaign was implemented by CABI’s Pest Risk Information SErvice (PRISE) project in partnership with Precision Development (PxD), Smart Zambia Institute and the Ministry of Agriculture of Zambia to provide smallholder farmers with timely advice on how to prevent and manage FAW infestations throughout the 2019-2020 season, as well as location-specific FAW infestation alerts

CABI’s Evidence Note published in 2018, revealed that maize farmers had average losses of 35% in Zambia due to the pest. When the losses were extrapolated nationally, it was estimated that the lost economic value amounted to USD $159 million. To help manage losses, a digital extension campaign was carried out in Southern, Luapula, Central and Eastern provinces of Zambia which the Ministry of Agriculture identified as high priority and high FAW risk areas.

The campaign utilized the Zambia Integrated Agriculture Management Information System (ZIAMIS)- an e-subsidy platform to reach 86,244 farmers with a total of 39 text messages (SMS) about FAW in mainly three local languages – Bemba, Nyanja and Tonga. The campaign was used as an opportunity for CABI and PxD to investigate the impact of providing detailed and actionable advice to farmers on their knowledge acquisition and behaviour change based on recommended practices.

Topics covered by the campaign messaging included scouting for FAW and monitoring its activities, recommended cultural methods of FAW removal, the correct use of fertilizer and pesticides to combat and control the effects of the pest.

A post-campaign survey carried out seven months after the delivery of the last message revealed that the campaign increased farmers’ level of knowledge on fall armyworm and resulted in increased adoption of recommended management practices. This was revealed when the survey which covered 3,028 consenting respondents from the total campaign-target audience sought to measure, through a Randomized Controlled Trial (RCT), the level of knowledge respondents had acquired and retained on FAW. The survey also measured the rate of adoption of the recommended practices by analysing farmer feedback and comparing the treatment group (farmers who received the fall armyworm messages) and control group (farmers who did not receive the fall armyworm messages)

According to the survey report, the treatment group answered more questions about FAW correctly and more frequently reported taking the course of action the campaign recommended in the advisory messages. We find the positive effect of treatment especially heartening because it was detectable despite the significant time lapse between the campaign itself and the follow-up impact survey.

On the whole, survey respondents from the treatment group had a knowledge index score that was 2.64% higher than the control and an action index score that was 4.67% higher than the control group. In addition to the enhanced knowledge and increased adoption of good agronomic practices, the survey also revealed that there was high demand for more agricultural information services through digital campaigns similar to this one. While 99% of all farmers surveyed indicated they were interested in receiving free digital farming advice in the future, 96% of treatment recipients indicated that they would recommend the service to their friends.

These positive outcomes give a good indication that such programmes have enormous potential in supporting smallholder farmers’ information needs given the low cost of digital extension options available now compared to other traditional alternatives.

You can read the full report from the SMS evaluation here

This article was originally published on blog.invasive-species.org 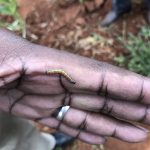 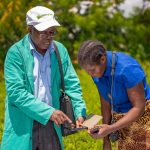